According to oral histories, the original Southfield Store building was built about 1907. Little is known about the owners in those early years. What is known is that in 1928, the building was destroyed by fire.

At that time, Dudley Turner, owner of the Turner and Cook Whip factory just down the road from the store, also owned the store and supervised it’s rebuilding in the aftermath of the fire. The rebuild store apparently shared the same footprint as its predecessor and is the same building, with only minor changes that we see today. The new building, which also included the Southfield Post Office, reopened for business in 1931.

In 1934, Turner sold the Store to the partnership of Gardner Rug and Tim Oates. In 1936, Mr. Oates sold his interest to Gardner Rug, who continued the Store’s operation with his wife, Dorothy—know to her many friends as “Dot”. Mr. Rugg died in 1967, and his widow soldiered on for several years before deciding to sell.

In 1970, Victor and Pearl Spigarolo of Waterbury, CT, bought the property from Dot Stevens, which by that time included the Store and the small house at the rear of the property.

Barbara and David Lowman bought the Store and house and took over the business in October of 1980. During the Lowman’s tenure, the Post Office moved to a ground floor of the Buggywhip Factory. The Lowman’s operated the store until October 2001.

Until its current incarnation, the Southfield Store had always been a general store, selling a wide variety of merchandise befitting a rural community—groceries, meats, gasoline, delicatessen, hardware, house wares, agricultural products, clothing and so forth. While sandwiches were an occasional item during the Ruggs’ tenure, with the construction of the Kolburne in 1968, they became a standard feature. That practice continued throughout the 2o years the Lowman’s operated the Store. And while there were no tables and chairs in the store, depending on the season and the weather, customers would often eat their sandwiches either in the Store or on the porch benches.

In November 2003, Tim Newman became the store’s owner and operator. Newman spent seven months on renovations and opened in June 2004. In all these years, we know of the Store being closed only after the fire in 1928 and from October 2001, when the Lowman’s retired and its reopening on June 3rd 2004.

Much has changed in Southfield—indeed in all the southern Berkshires—since the Lowman’s purchased the Store in 1980. New Marlborough Township, of which Southfield is a part, was “discovered” by a growing number of New Yorker’s eager to experience life in these gentle hills. Over the years, more and more families and couples with ties to New York City purchased homes or property surrounding Southfield to enjoy on weekends and for longer stretches during summer and ski season. Today something like forty percent of property owners in the area fall into this category.

With its reopening in 2004, the Store was transformed from a classic New England general store into a Cafe and Coffee Bar, with seating for 30 people and daily food service, as well a retail business offering fine groceries, an international selection of cheeses and cured meats, wine, beer and spirits, things for the kitchen and table and gifts.

Today the Store is owned and operated by Peter Platt and Meredith Kennard and continues as a café serving breakfast, lunch, and in the summer, dinner Thursday through Sunday. Peter and Meredith own the Old Inn On The Green where Peter is chef. 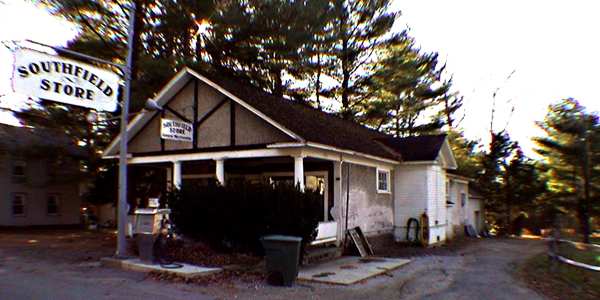 The Southfield Store circa 2002. This was the original exterior style of store when it was built in 1929. 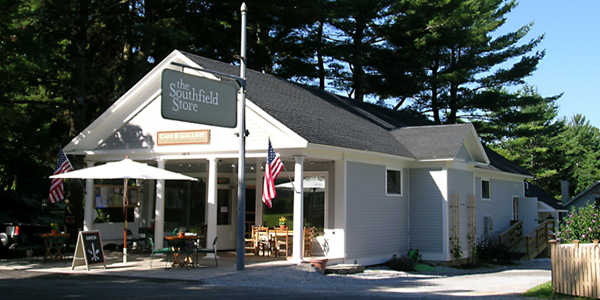